This involves building a Signal Integrity Test Vehicle (8-10 layers) and measuring insertion loss for Single ended striplines and differential pairs. If extraction of DK and DF is desired, a 2D solver is used to simulate the conductor loss, and a fit to the delta between the measured insertion loss and the simulated conductor loss is used for the dielectric loss. Roughness corrections are further applied by examining cross sections. While this sounds good, the problem is that the loss models for the conductor do not include ground plane losses. So, all that loss by default falls into the dielectric bucket. The result is non-physical extracted data which shows unusual and inexplicable behavior that is far more a function of the extraction process than any real physics. The extracted data cannot be used for modeling: the same material on different test vehicles may show different dissipation factor values, with data being >80% off at the same frequency depending on the board shop carrying out these tests.

Some improvements in the technique have been made, but the extraction logic is that the conductor losses should be a function of square root of frequency. So, if data is regressed against the square root of frequency, then all conductor losses would belong to this category including the roughness. However, a simple multi-variate regression analysis of simulated losses can easily show that even though the roughness loss should track with the square root of frequency, it actually corelates better with frequency, so much of this component of the loss would show up as dielectric loss in such an extraction approach. While the designs are agnostic to the source of loss, the SITV does end up as a qualifying vehicle for materials without yielding any reusable data. An additional downside to this approach is that building SITVs is an expensive proposition and a major cause of delay for next generation programs.

The Conductor losses can be simulated using numerical methods, through closed form expressions, or through combinations of the two approaches.
The most common approach for conductor loss computation is Wheeler’s Incremental Inductance Rule. This is a numerical approach and is given by [11]:

is the conductor loss,

is the skin effect resistance (given as

is the skin depth),

is the characteristic impedance of the trace, and

is the permittivity of the dielectric material.

A common technique used is to calculate the value of

by perturbing all the dimensions by half the skin depth

value. This is the approach used by Cohn [12], as in the below expression for conductor loss on wide traces:

is the thickness of the trace,

is the total dielectric height, and

is the width of the trace and

is the skin depth, and

is the ground plane resistance of the trace,

is the DC resistance of the trace,

is the trace thickness,

is the width of the trace, and

is the normalized frequency (

is the magnetic permeability,

is the conductivity, and

is the frequency) [8].
The total conductor loss is computed by using

, the total resistance, given as:

is the resistance in the signal layer.

Now, it should be noted that very accurate closed form expressions are not available. However, numerical methods can be used to compute the ground plane resistance and current density very accurately.

The missing link between simulations and measurement data can be largely attributed to models not accounting for ground plane losses.

The following sections will show that the missing link between simulation and measurement data is not a lack of accurate Dk and DF data, but rather inadequacy of loss models that do not account for ground plane losses. These sections will show that there is no need for extracting Dk and DF – measured Dk and DF numbers from methods such as Bereskin or equivalent are accurate enough to produce high quality simulations that agree very closely with measurements. With ground plane losses accounted for and with the availability of data from the vendors, including accurate copper and oxide roughness, such simulations eliminate the need for SITVs. These simulations will be very accurate, especially so in the regime of ultralow loss materials with ultra-smooth copper, where these simulations are primarily used for new designs.

Based on the data provided by copper foil suppliers the

value is closely related to the

value and was approximated as

values below ~2.0  (this would correspond to

). The values used for these simulations were well below this threshold.

The following figures show comparisons between the measured insertion loss and simulations using each of the three conductor loss models listed above (the line labeled “Gauss” is the Full Conductor Loss Model). 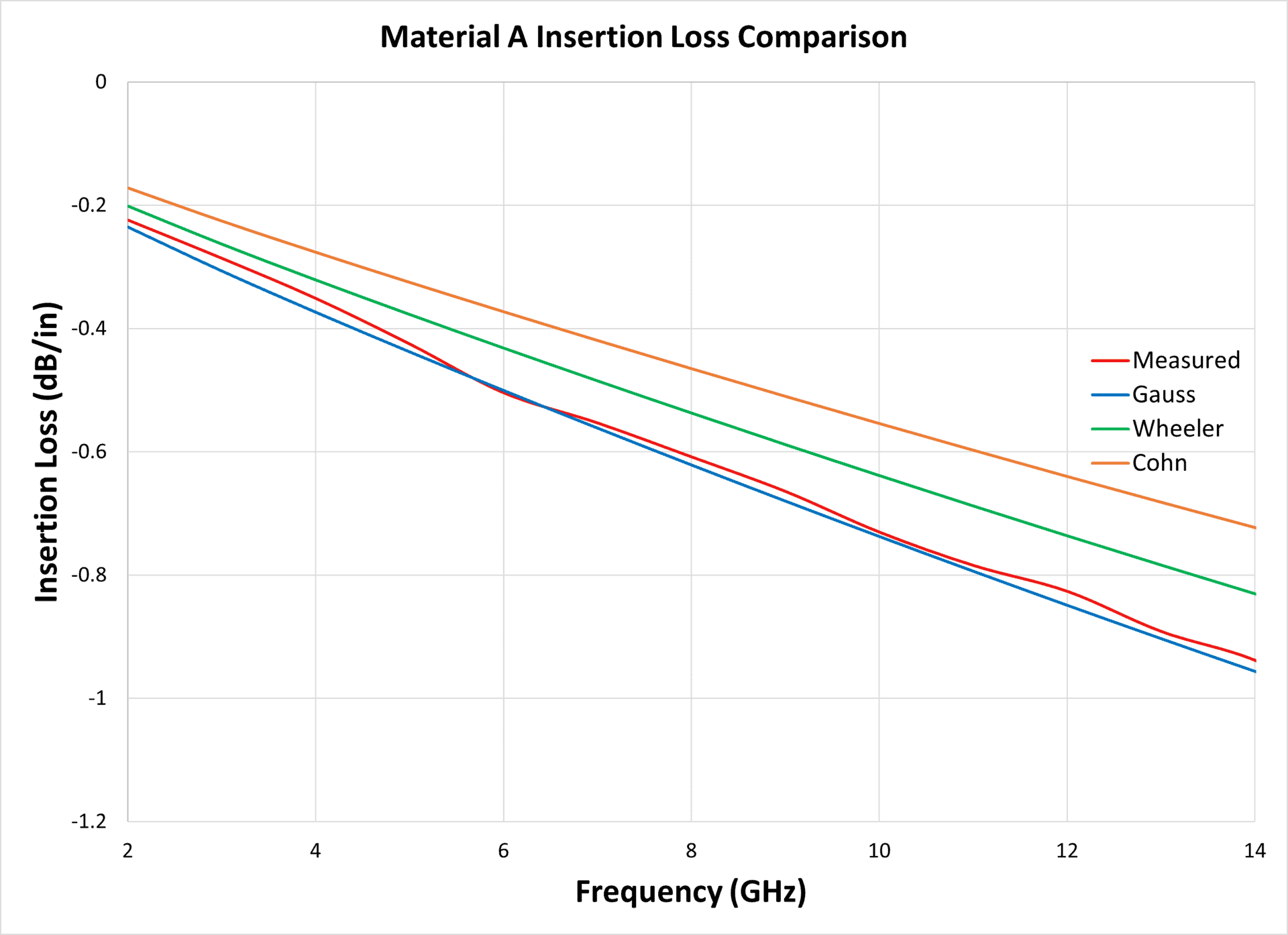 Figure 3. Comparison between measured and simulated insertion loss for Material A test vehicle. 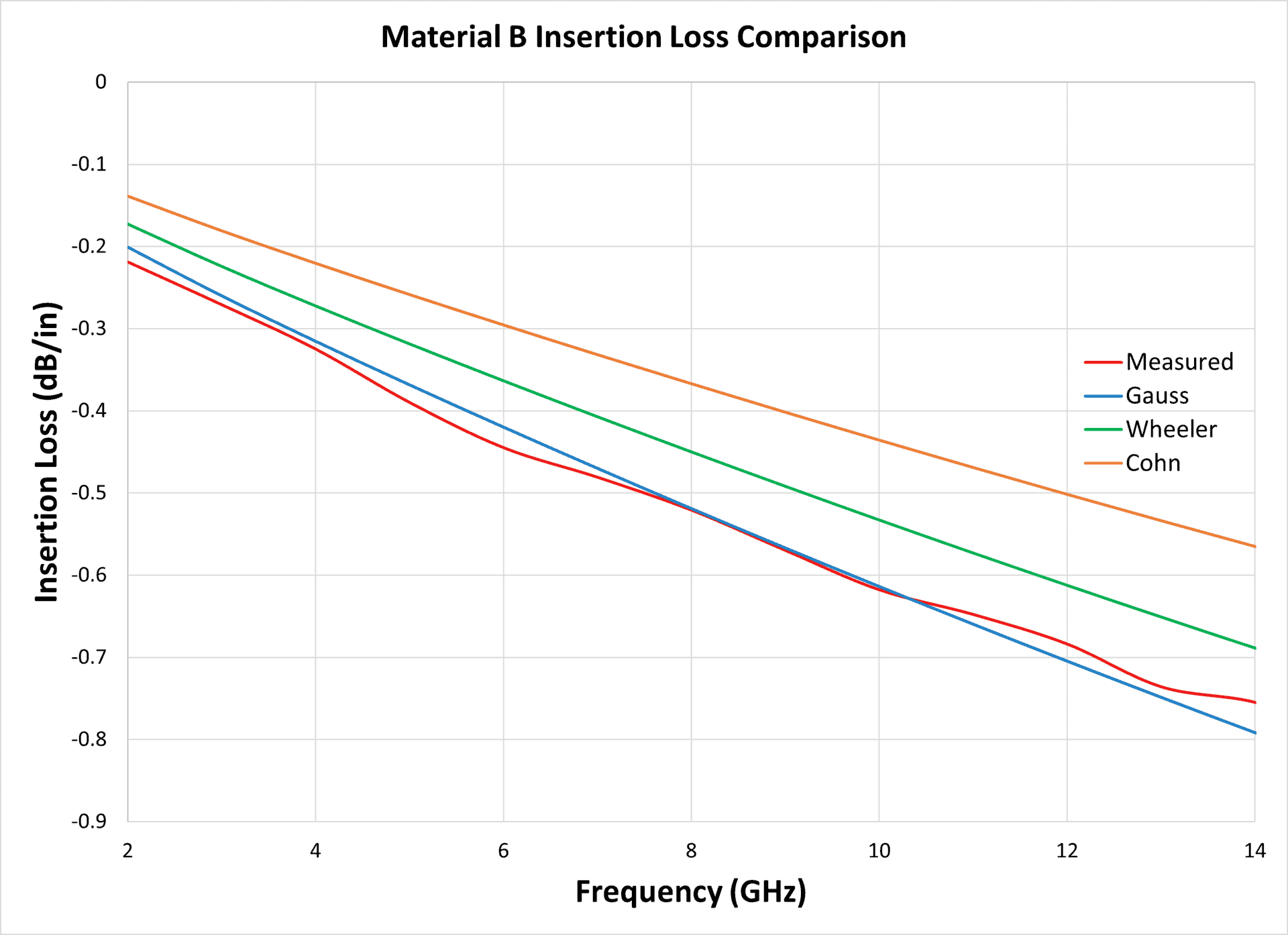 The full conductor loss model (Gauss) shows exceptional accuracy in modeling insertion loss – this can be achieved using the Hammerstad model, with direct input of copper roughness values, and direct input of vendor provided Dk and DF values without any tuning. The Wheeler model shows lower accuracy and becomes less accurate, still, as frequency increases. The Cohn model is even less accurate than the Wheeler model across the frequency range, because it was built using curve fitting methodology. It is precisely this gap between measurement and simulations conducted using such models that have been the source of significant confusion. However, through this comparison, it becomes clear that a signal integrity simulation can be highly accurate for insertion loss with vendor provided input data, if the simulation models and includes ground plane losses.

The below simulation workflow is recommended as best practice for accurate results. The following points should be carefully considered:

Figure 5. This details a best practice simulation workflow for accurate modeling of insertion loss. By following this, a designer or engineer can accurately predict insertion loss without the need for measuring data on built SITVs.

As is detailed in this simulation approach, uncertainty analysis is also a key part of evaluating signal integrity behavior. Manufacturing tolerances and variability result in a statistical distribution, rather than a single point value. A high-fidelity signal integrity simulation that includes ground plane losses would provide a close prediction for the mean value, but, through multivariate Monte-Carlo simulations built on top of these simulations, one can build a confidence interval on impedance and loss. Gauss 2D’s Uncertainty Analysis utility, which conducts such multivariate Monte-Carlo simulations based on variations in dielectric heights, trace widths and thicknesses, spacings (for differential lines), Dk and DF, and roughness parameters, was used to generate the following figure for variability on Insertion Loss at 10 GHz for the Material A example shown in figure 3. This figure shows that, at 10 GHz, a 95% confidence interval on Insertion Loss for 5% tolerances on dimension, 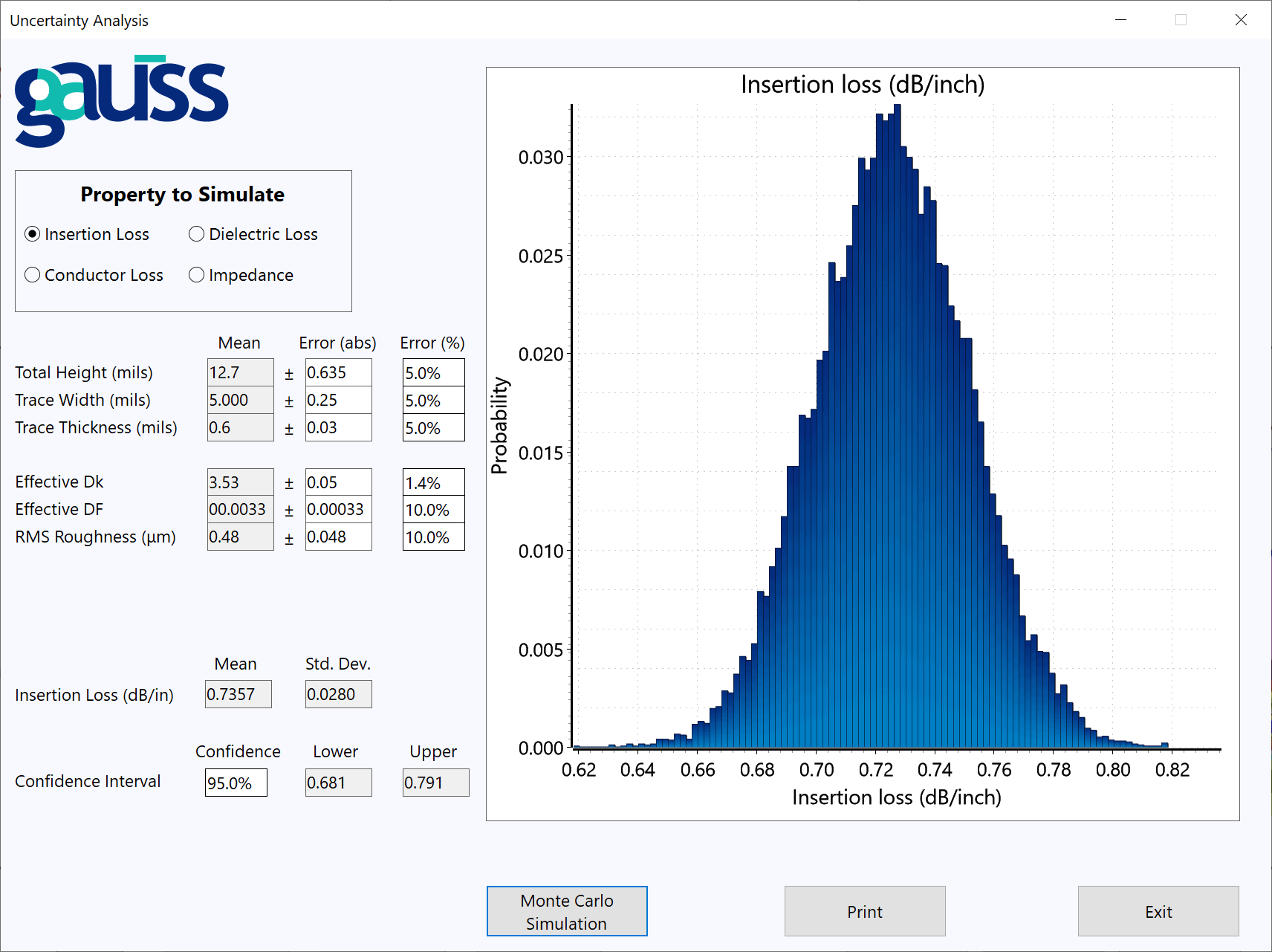 Figure 6. This shows the results of the Multivariate Monte Carlo simulation conducted in Gauss 2D for the Material A test vehicle at 10 GHz.

Dielectric data: Only Stripline Resonator or TM mode data for Dk should be used. Using TE Mode or Cavity data for DF < 0.005 will produce low error results, as the effect of anisotropy on low DF values will not be very significant, though stripline resonator data still is preferred, as these methods measure in the correct direction.

Copper foil roughness and Conductivity and oxide roughness: Copper foil conductivity data is also available for some vendors. It is a key factor in determining the loss and incorrect values can result in significant errors. RMS roughness data can either be closely approximated from the vendor data on  or may be directly available. Data for the Huray and Causal Huray models is hard to come by. This issue can largely be resolved by using the Hammerstad model, though, since, for RMS values less than 2 , the Hammerstad model works quite well – most copper foils for ultralow loss applications have  value below 3 µm, which would indicate that the RMS values are ~0.6-0.7 µm, significantly below the 2  threshold.

It was shown that the DK and DF measurements are highly accurate as long, as the user understands what directional properties are being measured. TM mode or Stripline resonators provide accurate DK results for modeling. Measurement techniques such as unwrapping the S21 phase can provide a direct measurement of the DK, though these will include the effect of the roughness of the conductor.

Ground plane losses can be very significant, especially if the width to height ratio is high and when ultralow loss materials are being used. Almost 80-90% of losses, for such next generation designs that use ultralow loss materials, are due to the conductor and not accounting for ground plane losses, which can be as high 35% of those losses, will lead to underestimating the losses significantly. 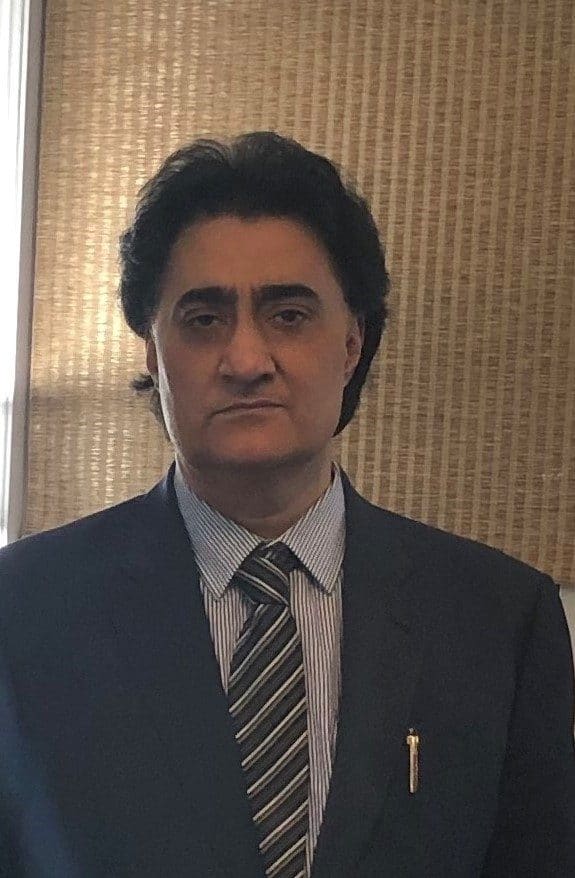 Dr. Tarun Amla is the Co-founder and Chief Technology Officer of Avishtech. Most recently prior to his current role, he served as EVP and Chief Technology Officer for ITEQ Corporation, heading ITEQ’s global Research and Development and Engineering. Tarun’s career in the electronics and electronics materials industry spans more than 25 years, during which time, he has also worked for AlliedSignal, Isola and Shengyi, holding positions of increasing responsibility. Some areas of Tarun’s specific technical expertise include Materials Science and Engineering, Signal Integrity and Signal Processing, Optimization, Computational Mechanics, Numerical Methods, and Machine Learning. He is a named inventor on more than 11 pending and issued U.S. patents and many more issued and pending foreign patents.